April 21, 2017
To illustrate the importance of hand washing, I got my son these petrie dishes and agar for Christmas. We'll just cook up the agar, let it solidify and cool, then swipe our hands on it and watch those microbes grow. I'm sure they won't look like this.

Turns out it's #microbeweek. I'm fascinated by microbes, and how we are walking talking sacks of microbes that do and do not get along with one another. Our microbes make up who we are.

Liaisons of Life: From Hornworts to Hippos, How the Unassuming Microbe Has Driven Evolution, by Tom Wakeford, is one of my favorite books.

Give this particular Science Friday a listen--if your body's bacteria doesn't fascinate you--when you hear this, it surely will. I have a gut feeling.

Our bodies teem with tiny organisms.

It's floating all around you, all the time-a wafting cloud formed by billions of bacteria that slough off your body with every movement you make. At the Biology and the Built Environment Center at the University of Oregon, researchers have revealed that not only can they detect and catalog this personal microbial cloud, but each person's cloud is unique.


P.S. Beatrix Potter is my hero. She discovered the symbiosis of lichen, which is both cyanobacteria and fungi. But her peers didn't believe her, nor did they even care to try. Here is an excerpt from a paper written in response to the book, "Liaisons of Life"


Scientific papers that concurred with and extended observations of Simon Schwendener (ca. 1870) garnered much evidence that lichens were not plants. The superb naturalist and artist Beatrix Potter had, in the late 1890s, prepared detailed studies, including beautiful watercolor plates, of many British lichens. Indeed, no lichen was a plant—the more she observed, the surer she became that lichens were “dual organisms”: a green partner in intimate contact with a fungal associate in each case examined. Though Potter is famous today as the author of the popular and charming Peter Rabbit series of children's books, few know the story Wakeford tells of her thwarted career as a scientific investigator. Not only was her work ridiculed and rejected by the botanists of the day (e.g., Reverend Leighton in his classic book The Lichen-Flora of Great Britain, Ireland and the Channel Islands [1871] wrote, “I have purposely omitted any mention of the Schwendenerian Theory of Lichens, as I cannot but regard it as purely imaginary, the baseless fabric of a vision,” and well-known naturalist Reverend James Crombie mused, “A useful and invigorating parasitism—who ever before heard of such a thing?”). As a woman, Potter was even refused entry to the open sessions of the Linnean Society, Burlington House, London, where these issues were routinely discussed. In the end, in 1897, her influential and favorite uncle, the chemist Sir Henry Roscoe, was permitted to read her paper for her. The manuscript itself was lost and not until a century later, in 1997, did Potter receive an official—of course, posthumous— apology from that venerable society for its treatment of her undoubtedly correct Schwendenerist analyses of lichens. The term Schwendenerist was one of serious abuse: It mocked not only those who claimed that lichens were not plants but any who took seriously the importance of symbiosis in physiology, taxonomy, and evolution. Botanist M. C. Cooke wrote in 1879 that “even if endorsed by the nineteenth century,” such ludicrous symbiotic ideals “will certainly be forgotten in the twentieth.”

If the answer to Am I the only one? is never yes, why does being human feel so lonely sometimes?

This morning I dropped off my kids at daycare and the bus stop for camp.

On the way to daycare, my daughter sang, "Over In the Meadow."

Her brother listened and helped her remember the words.

As she sang about robins flying, three, a cloud of sparrows flew overhead, moving around us as we drove up the seasonal road where we have lively debates about the difference between a puddle and a pond.

Tilia starts Kindergarten in a few weeks, just a few weeks left with our dear friend, Chris Evans, for now.

When I say Chris Evans helps me raise my kids, I mean it. We cannot do this alone and her influence on our children is a gift. Hence: Tilia singing "Over In the Meadow, " and Jacob helping her remember the words.

They can be so kind. They have wonderful imaginations. They get to be among peers. Jacob is older now, and goes to camp instead of daycare, but he was one of Ch… 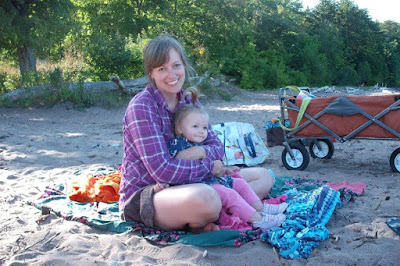 If I could pick a second birthday, today would be that day: August 23.

I had a panic attack for the ages on August 23, 2014, and it landed me, via ambulance ride, in the ER in Petoskey where I begged a nurse, Nancy, to hold my hand and give me a drink of water.

Tests were ran, and I was sent home shortly after that, "Rock solid."

It was my first experience with a mental health crisis in the ER, and received the message loud and clear, "You're kind of a pain-in-the-ass here."

And so, my husband drove us home that evening to what would become a stretch of hellacious-ness as I wrestled to keep and yet thoroughly lose my mind: insomnia for days, more ER visits, a week at the Munson partial hospitalization program, then two weeks of full hospitalization at Sparrow in Lansing.

It's a stretch of divine hell and sweet mercy I will never get to fully understand. And maybe that's its gift.

The thing about that stretch of hitting my rock bottom and rising is this:…

Thank you, Patricia Ann McNair, for the times, good and real, that you reflect on in your book, "AND THESE ARE THE GOOD TIMES: A Chicago gal riffs on death, sex, life, dancing, writing, wonder, loneliness, place, family, faith, coffee, and the FBI (among other things)".  The way you capture the warmth and nuance of being human is so very moving. Your beautiful essays bring my attention to our seemingly small interactions and exchanges with one another, how these hold weight, equate to the whole spectrum of tenderness and harshness that add up and make up our day to day lives--our whole, lived lives.

I felt very much like I was getting to visit with you over coffee or beer in your book. Your company, your insight, is oh so excellent. I just loved it.

In a time where it is easy to move through life without reflection, and self isolate through technology--thank you for reminding me of the heat that makes us human, for the reminder to get out and be in the world, have company, …